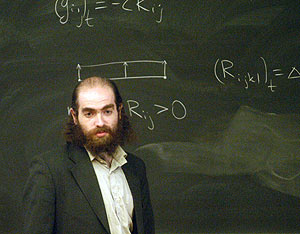 On June 8-9 CMI held a conference in Paris to celebrate the resolution of the Poincaré conjecture by Grigoriy Perelman. Dr. Perelman has subsequently informed us that he has decided not to accept the one million dollar prize. In the fall of 2010, CMI will make an announcement of how the prize money will be used to benefit mathematics.

Jim Carlson, institute president, said Perelman’s decision was not a complete surprise, since he had declined some previous math prizes.

Carlson said Perelman had told him by telephone last week of his decision and gave no reason. But the Interfax news agency quoted Perelman as saying he believed the prize was unfair. Perelman told Interfax he considered his contribution to solving the Poincare conjecture no greater than that of Columbia University mathematician Richard Hamilton.

“To put it short, the main reason is my disagreement with the organized mathematical community,” Perelman, 43, told Interfax. “I don’t like their decisions, I consider them unjust.”